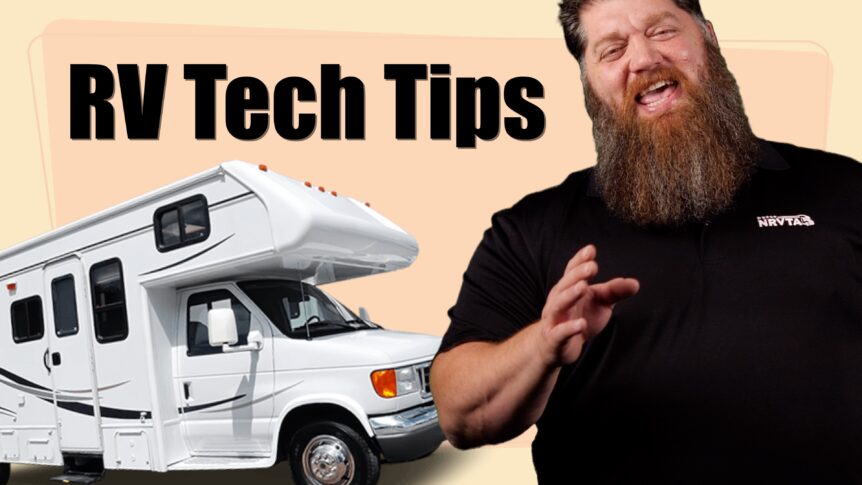 If there is one thing all RVs have in common, it is more batteries than a typical car.

With the exception of a pop-up trailer, most RVs will have at least two batteries to power everything inside the rig when it is not plugged into shore power. Motorhomes will have an additional battery to provide power to the engine.

All RV batteries should be serviced at least once a month, said Todd Henson, an instructor at the National RV Training Academy. He provides some tips to keep batteries in good shape to deliver power whenever you need it.

All batteries are designed to deliver 12.7 volts of electricity. But, if the batteries aren’t used, they will naturally discharge their power.

“The old adage is true; if you don’t use it, you lose it,” Todd explained. “If the RV just sits without being used, you will typically lose one volt of battery power per month. So, it’s really important to help a battery maintain its charge.”

When winterizing an RV, it’s best to keep it hooked up to a power source so the rig’s onboard charging system will keep all batteries fully charged.

But, what if that isn’t possible because the RV is parked in a storage lot, or you don’t really want to keep it plugged into your house when you’re not using it for several months?

In that case, you must remove the battery from the RV and store it where it can be connected to a trickle charger, said Todd.

“Trickle chargers deliver no more than 2 amps of power to a connected battery, and you can pick them up at any hardware or automotive store,” he explained. “However, it is important that you set the charger to match the voltage of your battery. Most batteries require 12-volts, so look for a 12-volt charger or ensure the charger is set to work on 12-volt batteries.”

The worst thing RV owners can do is to simply remove a battery and pop it on a shelf somewhere.

“Once a battery is no longer fully charged, the electrolyte inside will begin to crystalize and break down, which significantly reduces the battery’s life,” Todd said.

Once a battery has been in storage, and even if it has been plugged into power for quite some time, it is important to check the fluid level.

Battery fluid is a mixture of distilled water and sulfuric acid. However, over time, the water can evaporate. If a battery is overcharged, the water can be split back into hydrogen and oxygen. As the water level decreases, it exposes the metal plates that are essential for storing power.

Once the plates are exposed to oxygen, they can corrode and the only solution is to replace the battery, said Todd.

It’s vitally important to ensure the metal plates remain covered in water. So, once a month, you need to remove the remove the plastic caps on top of the battery in order to add more distilled water.

“I highly recommend wearing gloves and safety goggles whenever removing a battery cap because you don’t want battery fluid to splash into your eyes, nor do you want to get that liquid on your skin,” he explained. “It is very corrosive and will cause a burn.

“I also recommend using a battery filler. It’s an inexpensive rubber bulb that looks like a turkey baster. The device can safely add water to batteries instead of pouring water directly into the holes where it can splash and make a mess with the highly-corrosive liquid.”

With goggles and gloves on, use a flathead screwdriver to slowly pry the caps off the battery.

“You will know the battery is self-serviceable because it has caps on the top,” said Todd. “If there aren’t caps on top, then you have a gel-type, lead-acid or absorbed glass material (AGM) battery that doesn’t require any regular maintenance.”

With the caps off, squeeze the battery filler’s bulb, stick the hose into distilled water and release the bulb. That will suck water out of the container into the bulb. Then, position the hose over the circular opening to the battery and gently squeeze water into the chamber.

“You don’t want to fill the battery to the top of the cap,” he explained. “You want water to just cover cells inside the battery.”

Repeat the process for every cell in the battery.

Once the fluid levels have been maintained, the battery may show a slight decrease in power capacity due to the introduction of new water to the system. That’s okay, said Todd. Simply put the caps back on and hook up the battery to a trickle charger for a while to bring it back to full power.

Whenever you add water to the battery, it’s also a good time to clean the connectors and remove any gunk that may be on top the top or sides.

If there is any visible corrosion, you can loosen it by covering it with baking soda and pouring vinegar on top. It will bubble and fizz for a while, then just rinse it off with water or wipe it off with a rag.

Rather than plug the RV into your house for months on end, new technology makes it easy to charge a battery with solar power. If the RV will be parked where it will be exposed to sun several hours a day, then attach the solar panel to a BatteryMINDer, which works to limit power going into the battery.

It’s not advised to connect a solar panel directly to a battery because there isn’t any way to stop power from going into the battery once it is fully charged. It’s just as easy to blow up a battery with too much power as it is to drain it by not supplying enough power to it, said Todd.

“If you keep the batteries charged when not in use, and regularly add water to them when they are being used, you will significantly extend the life of your batteries and ensure you have power whenever you need it,” he added.

If you want to learn more about how RV electricity works and how to fix the majority of problems you’ll encounter on your rig, check out the programs offered by the National RV Training Academy. You can even find information about becoming a certified RV technician or inspector by visiting www.nrvta.com.