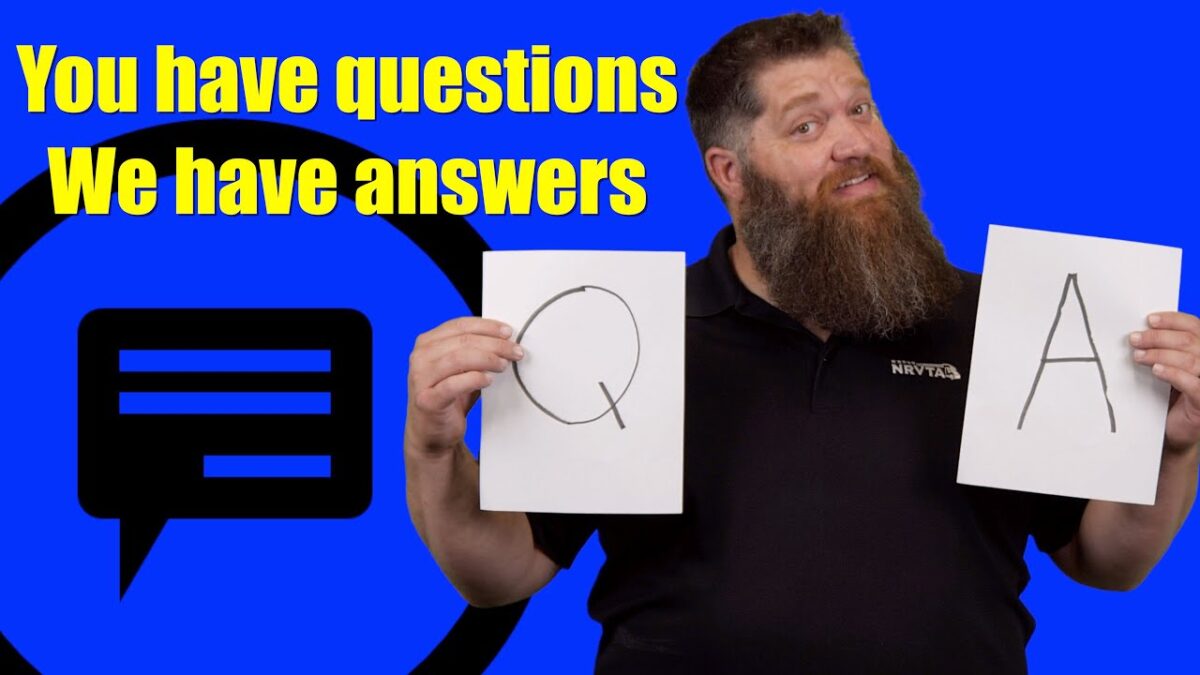 Q: Why does my propane tank freeze when it’s 36 degrees outside?

A: As we’ve said in other videos, propane turns into a vapor at -44 degrees fahrenheit. So, the reason it doesn’t freeze in the summer is because we have high temperatures outside, plus we aren’t using propane very much in the hotter months. There has to be a change from the liquid to vapor form in order for there to be a heat exchange on the outside, which comes from demand which we have in abundance in winter as opposed to summer, when we don’t use our furnace. So what happens is that with greater demand coming from our furnace than heat on the outside in winter (remember, in summer we have the heat outside keeping the tank warm), we have more propane turning from liquid to vapor which begins to freeze the outside of the tank. Ironically we use propane for heat, but we get this condition because our tanks are outside where it begins to freeze.

Q: Can I transport propane tanks in a crate in the back of a truck?

A: For typical transport the D.O.T. wants the tank strapped down 8 times in any direction. However, if you’re just going to fill and refill (I am not a D.O.T. employee and do not claim to be one) I would assume they would allow you to transport back and forth similar to how you transport fireworks; it’s illegal to transport fireworks, but how are you meant to get them from point A to point B without putting them into your vehicle? So there’s a little caveat there, I would imagine. So again, I’m not an officer, but a milk crate is still better than nothing. But if it’s long term transportation hooked up to your RV, they definitely do not want them sitting in the back of your truck.

Q: The tank on my RV is mounted sideways…

A: Now ASME tanks, again, they’re similar to the forklift tank: it’s built to be transported horizontally so we will see all of the safety devices are elevated, not in the middle, but upwards of the 80% mark should the tank be filled from the bottom up. Again, we’re distinguishing between a D.O.T. cylinder, ASME tank or forklift tank.

So I also made a video that suggested using your water pump instead of being hooked up to city water, you guys had some questions about it so let’s look at those next.

Q: Can I run city water and my pump at the same time?

A: This is one of the main questions that come back, and the thing is that those pumps will seek anywhere from 45 to 55 PSI and if you’re getting that from the city, the pump won’t ever turn on. If you’re in a municipality or an area where the city drops below 45 PSI, yes your pump can kick on. But the question now is: Why run both? Again, if you’re in a city where the water pressure keeps fluctuating, why not fill your holding tank and use your pump so you have consistent pressure? I do understand that in some cases the tank may be dirty, but if it’s clean and you want to have the most consistent water pressure, filling your tank and using your pump is the best way to go. Running both means having the electricity on and waiting, which can cause pressure to come through in reverse from the city water and damage the pump once it turns on. I strongly suggest that if you plan to use your pump, to only use it once you’ve filled your tank and if you’re wanting to use the city water, to use it alone. Mixing the two can cause unnecessary damage.

We also did a video on different types of batteries, so we have some feedback I’d like to address.

Q: Do you need different chargers for different battery types?

A: Absolutely! Lead acid, which includes lead, gel and AGM batteries will use one type of charger. It could be a multi stage charger. The maximum we will do our float charge is 13.2 volts. When we switch over to lithium, however, the state of charge is about 14.4 volts. Since voltage runs downhill, we need a special charger that can overcome that 14.4-14.6 volts. So if I lump them into two different categories we will have AGM, gel and lead acid on a standard converter charger. If you ever upgrade to lithium you’ll have to have a lithium charger that can overcome the 14.4 volts continuously.

Q: Can we add a fan to the back of our fridge to help with airflow?

A: In some of our RV style refrigerators, there’s a fan located in the back. The only time we have a fan is when the refrigerator is located in a slide out. In short, adding a fan is not my first choice. The fans already on the refrigerator, for starters, do not stay on at all times. Dometic may have theirs set to come on at 110 degrees and turn off at 160. Norcold, however, may have theirs come on at 90 degrees and shut off at 60. So it’s not best to add another fan, especially when it’s cold outside. There actually needs to be a heat transfer built up. But, in summertime can you add a fan? Well the first thing I would do is make sure that the refrigerator is properly installed and the right airflow. If we are achieving the correct airflow by making sure it’s installed correctly, yes we can add a fan and turn it on permanently during the summer months. Just understand that as we move into autumn and winter, you’ll definitely want to turn the fan off because we want that heat to build up to keep the refrigerator cool.

Q: How do I keep rodents out of my RV?

A: Well guys, you got me. I’ve seen all these different tips out there, like putting bars of soap out and then photos of those same bars of soap chewed up with the caption saying, “Look! Rats ate the soap!” So to me the best thing to do is get a cat and keep it on the edge of being hungry. It will eat those rats. Kidding. Sort of. But our RV parks are outside the city limits and in a wooded area in most cases, so it’s something we have to deal with. I’ve seen some people say to put lights at the bottom of your rig because the rodents won’t cross the lights, and for some it works and for others… not so much. Short of building a moat around your rig, but then again, I’ve seen rats that swim. Ever seen a nutria?

And there’s your Tech Tip!

If you would like to be able to fix the majority of the problems on your RV, or let’s say you want to open a business and become a certified technician or inspector? Head over to our website at www.nrvta.com, select the programs tab and get started today!